“Beginning with pig farms, we established the first integrated Korean pig farming business. We stuck to our roots, raising pigs even now.”

We began pig farming under the name “Cheil Breeding Stock Farm” in the early 1970s, when everybody was experiencing economic difficulties. We held on to the belief that like pig farms in Japan, those in Korea could progress from being a money-making side business of farms to a fully-fledged business.

Therefore, Sunjin made many “first attempts” in pig farming, including Korea’s first pig breeding business, Korea’s first bacteria-free pig experiments, Korea’s first branded pork meat etc. Of course, not all of these were successes. However, these efforts have allowed Sunjin to exist for more than 45 years.

Pig farming by Sunjin is now preparing for the 2nd great leap forward. We are raising Korean pigs suited to the land of Korea by developing genetic resources using BT(Bio Technology). We create a pig-farming environment that grows within society with state-of-the-art facilities that consider environment friendliness and animal welfare.

When Sunjin first established the Cheil Breeding Stock Farm, it was operated as a 2-site farm, which was rather innovative for the time. Fattening pigs were raised at nearby farms as a side-job; this was the early stage of pig farming integration at Sunjin and in Korea.

The 45 years of practical knowledge on pig farming at Sunjin developed into the form of pig farming integration with Sunjin Hanmaul Co., Ltd.
Sunjin Hybrid – The first pig breeding business in Korea with superior technologies
Sunjin Durogi – Fresh sperm provided in a timely manner by artificial insemination (AI) centers at various locations around the country.
Sunjin Bridge Lab – The first and greatest specialized pig farm veterinary company in Korea.
A complete pig farming network based on all these pig farming related businesses.

Each pig farm only needs to focus on increasing productivity, and Sunjin Hanmaul takes care of everything! This is the world of plenty that we create together by growing and developing pig farms. . 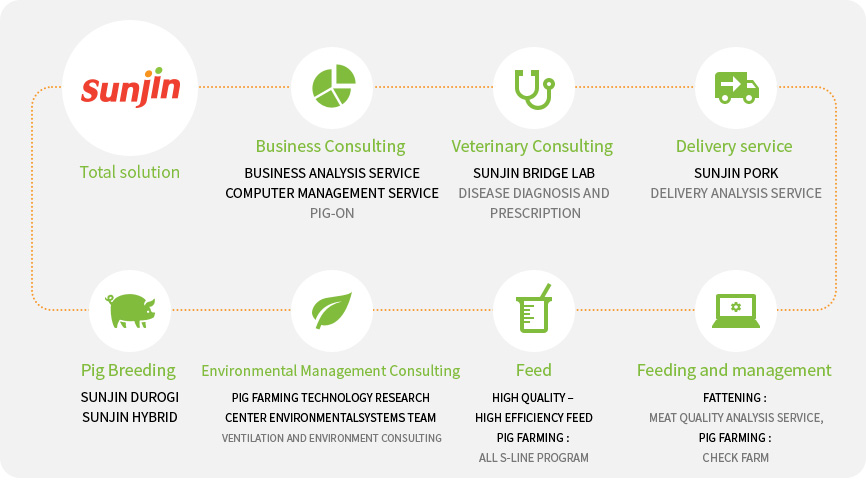